Fish Fry Lake was made with Bluegills in mind. What had been a seasonal pond in a long swale became a perennial pond with dam, and I spent two years playing with the bottom and its configuration. Since I knew I didn’t know the perfect contours, I went with variety. I incorporated boulders, some massive deadheads… think four-foot diameter cottonwood tree trunks… and lots of cobble and gravel. The cobble is sized to provide plenty of natural space for critters like crawfish to use as security cover. Today there are secure ‘gill spawning beds spaced intermittently in dozens of locations along the shoreline. And today it’s relatively easy to see that the premier spawning sites are those that are claimed by the big guys… these are the sites with minimal disturbance. Full sunlight, minimal shade. Not much slope either, with the big guys fanning their beds over gravel typically in about two feet of water. These settings are where you start if you want to tangle with one and half pounders on size twelve beadheads! There’s nothing like slab bluegill on a fly rod!

When Fish Fry Lake was being designed the thinking went like this…if prey species do well, so will the predators.

The predators may have to work a bit for their dinner, but this keeps them edgy, fit, and evolving towards the best of breed, so to speak. I really don’t want a north American version of KOBE fish, so no fish feeders.  Just rich, biodiverse habitat. I can’t control inflow nutrients, but I can make certain they cycle into something beneficial. That’s what BioHavens do. Nature does the rest.

We applied the same principal to our pheasant hunt on the property… design for optimal pheasant habitat, modify farming methods, and prey on predators. Our results on pheasants are recorded in a short paper, and it’s a worthy read if you are considering either wildlife or fishery design opportunities. Contact us for a copy.

Fish Fry Lake has bluegill, green sunfish, red ear sunfish, and pumpkinseed. And the reality is that I can no longer be sure just what species, or hybrid, is on the end of my line. But I have noticed a few interesting points… the males of what looks like bluegill are consistently in great condition… almost always with full gut. And when I remove the innards and cut them up into bite size pieces, small bluegill that are always hanging out beside my cleaning station scarf them up. If they miss on their first pass black crappie are right behind! The innards of these fish appear to be the foi gra of cut bait. When these big males aren’t defending their nests, they mix with other age classes. Maybe every tenth fish now is one of these lunkers. 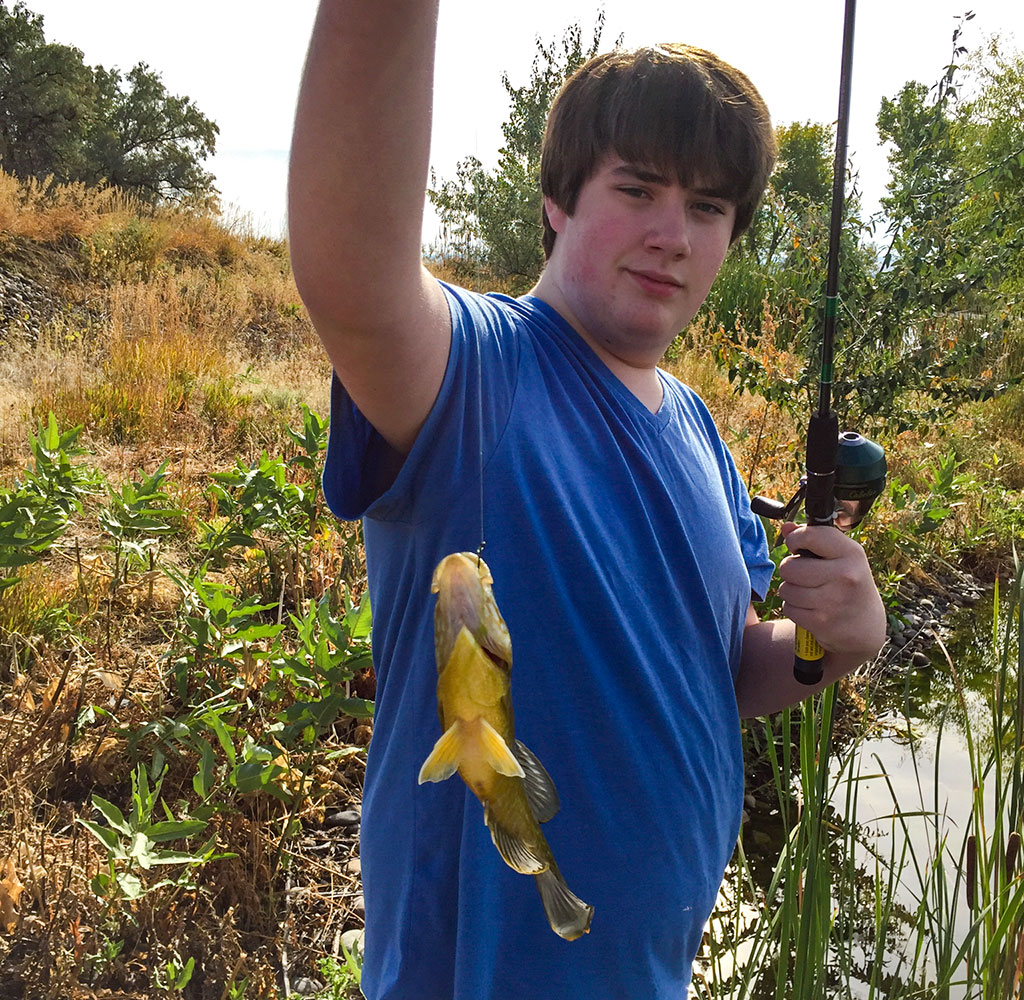 They are a thick fish and make a terrific filet. When we keep a dinner’s worth, we put them through a drum scaler, because crispy, skin on ‘gill fillets are my personal favorite eating freshwater dining experience. There’s no better way to collect a bucket of these guys then to position yourself on the lip of a BioHaven and work a wetfly along the perimeter of bullrush or northern milfoil. Not fast, just dab a bit of color along the edge, and “bang!” These guys hit with authority!

Today these guys are in the 7 to 10” range. When snorkeling or diving, I frequently see them loafing under BioHavens, sometimes right alongside three-pound bass. No sweat… they are well past the time when the maw of a bass was any kind of threat. The ‘gill sometimes nip into the periphyton that collects on the bottom of islands and on plant roots. They probably see some kind of invertebrate, maybe a damsel fly nymph, and I’m sure they pick up some greenery in the process. Maybe this explains the green tinge to the gut material? The fish also graze native sponge that grows into BioHavens on Fish Fry. It’s a tan color, and only that portion outside of the island matrix is vulnerable to grazing. I can’t imagine sponge is particularly nutritious, but it does add to the diversity. Which is always good.

Today was a Sunday in early August, so Anne and I set up with collapsible fiberglass poles, baited with GULP grubs, either white or pink. No weight, no float, just the hook/bait combination. We canoed five minutes from the beach into a narrow channel, out of the wind. Caught four buckets of another version of “keepers”, bluegill and sunfish up to four inches long. These are the ones that become cut bait and are cycled into big crappie and perch. We fished for an hour and I didn’t count the fish, but there were many times we were lifting fish into the canoe at the same time. Once a bucket was brimming with these guys, we’d canoe parallel to the live well and pour them in. In the meantime, taking care to exchange water as needed to avoid oxygen stress. Through the summer months we average processing between twenty and thirty of these small ‘gill per day. So, it’s not very scientific, but I can say that growth on perch and crappie is exceptional. 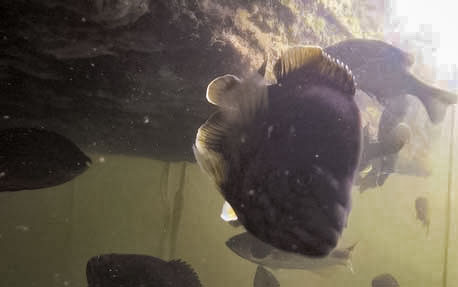 Every few minutes one of us would tie into a big guy. The line would dart, zig zagging towards the nearest weed bed, and we’d be hard pressed to turn the fish, with the pole bending double. Finally lifting him out of the water, or one of the nearly black females, to be released, as a spawner. Great fun!

The bluegill is an exceptionally productive component of Fish Fry’s food web. It’s very capable of developing into a stunted population, just big enough to avoid the maw of our northern bass, but not a filletable fish. Unless I’m willing to add northern pike or muskie to the mix, there aren’t a ton of great options around how to cycle them and their energy into a classic sport fishery. That’s why we do the cut bait thing. So far, the results are impressive, in terms of perch and crappie. And the ‘gills themselves too. They are bigger in size, as a population, with occasional exceptional fish. This process does not add nutrients into Fish Fry, but it does cycle nutrients up and into higher trophic levels within the lake’s food web. It’s become a useful component of our stewardship strategy, and I can hardly wait to see how the lake’s fishery will unfold over the next several years. Bluegills are the base, and a terrific addition to our fishery.
© Copyright Floating Island International, Inc. All Rights Reserved - Privacy Policy