by Mark Reinsel
However, until the advent of BioHaven floating islands, none of the human-designed systems purposely bio-mimicked nature's floating island models. Instead, they relied upon conventional buoyancy factors to achieve “freeboard” (the volume of a floating structure that lies above the waterline) to grow crops or provide communal living space. BioHaven floating islands are designed to replicate arboreal forest-based islands (Van Duzer, 2004).

Natural floating islands are typically peat-based and are essentially biofilm reactors. Biofilm- generating bacteria grow on the surface area of plant roots within the peat and on the surface area of the peat itself. Much of the island buoyancy is not associated with conventional factors such as low-density materials or entrained air. Instead, these islands float because of biogas (gases produced by bacteria within a biofilm) contained between the water table and the top of the island. This zone of trapped biogas can actually extend below the waterline on the inside of the island. This buoyancy contributes substantially to floating islands’ durability, longevity and size, which can encompass dozens of acres and support thousands of full-size trees.

Based on research funded by the State of Montana and Floating Island International (FII) and carried out at Montana State University's Center for Biofilm Engineering, aerobic, anoxic and anaerobic zones quickly develop on the matrix of BioHaven floating islands, when the surface area of the matrix is exposed to nutrient-laden water, especially when combined with circulation. Biofilm-generating microbes typically grow so fast that they are the only common life form to potentially take up nutrients more rapidly than phytoplankton (algae).
For water quality improvement using BioHavens, FII has developed a spreadsheet model to estimate either the floating island size(s) required to meet water quality objectives, or the effect on a waterway of a given floating island size. Capital costs can then be estimated. Water quality parameters that dictate floating island requirements include ammonia, nitrate, phosphorus, total suspended solids and Biochemical Oxygen Demand.

BioHaven floating islands cycle nutrients from water into periphyton, which is a base material representing an alternative to free-floating algae. Periphyton is the microfloral and microfaunal community (bacteria, algae, protozoa, etc.) living attached to submerged surfaces. One of its primary values is that periphyton does not experience the massive bloom and die-off cycle of free-floating algae. Instead, it provides a continuous and perennial source of both food and oxygen for higher forms of life. Numerous studies have documented periphyton's relative value in triggering massive fish production (Azim 2005). With some stewardship, nutrients that would otherwise cycle into algae and ultimately reduce dissolved oxygen levels can be instead transitioned into fish. This cycling of nutrients contributes to BioHavens’ ongoing buoyancy.

Microbes that colonize a BioHaven are resilient. When seasonal or other environmental conditions are not optimal, these microbes have evolved strategies to ensure survival. When conditions become more favorable, microbes rapidly resume their nutrient cycling abilities. However, certain environmental conditions, such as exposure to broad-spectrum biocides or herbicides, can affect even resilient microbial populations. When this occurs, BioHavens generate less of the biogas that accounts for their ongoing buoyancy. As a design safety measure and means by which to provide initial buoyancy prior to mature biofilm development, typically a period of about one full growing season, BioHavens incorporate a proprietary blend of marine-based polyurethane foam as added buoyancy. To date, 4,800 BioHavens have been installed in a wide range of settings around the world, including wastewater ponds, stormwater ponds, lakes, streams, rivers and oceans. FII has seen no documented cases of island buoyancy failure. While there have been instances of reduced buoyancy associated with addition of chemicals such as biocides, BioHavens have always recovered.
Island freeboard can also decrease with high atmospheric pressure. This is due to the corresponding reduction in the diameter of gas bubbles contained within biofilm coating the BioHaven matrix surface area.
It should be noted that marine FTWs have withstood up to a five-foot tidal surge.

Beaver, nutria, Canada geese and alligators have been known to dig holes into BioHavens. While such holes represent a cosmetic blemish, in no instances has such damage resulted in island failure. Muskrat are also suspected of damaging BioHavens on occasion but again, in no instances has this resulted in catastrophic failure or sinking of an island.

As BioHavens mature, they develop biofilm, diatom and phytoplankton forms of periphyton, which produce biogases and serve to maintain island buoyancy. Islands also become thicker as they mature. This results from plant humus accumulating on top of islands and other organic residue growing within islands. FII believes that young BioHavens correspond to the early- stage, peat-based, naturally occurring islands that they bio mimic. Such islands do not normally create the “pressurized vadose zone” seen in older, mature natural islands. Large, mature natural islands can be as much as six meters thick within 20 meters of their perimeter. Because of their low permeability, this thickness serves to contain biogas and contributes to long-term buoyancy. Accordingly, FII predicts that BioHavens will also develop pressurized vadose zones over time as they mature.

Monitoring of BioHavens indicates that their dry weight can nearly double over the course of a single growing season, with a 72% increase in mass measured over an 11-week period (Kania, 2013). However, based on monitoring of the same 520-square-foot island, thickness only expands slightly to accommodate this mass buildup. Currently the “520” island located at FII’s research center in Shepherd, MT has grown about nine centimeters thicker over an eight-year period, or approximately one half-inch per year.

BioHavens are composed almost entirely of a polyester-based, nonwoven, filter-like material. This material is composed of fine threads of matrix and is vulnerable to ultraviolet light degradation. FII and its seven island manufacturers provide quality assurance guidelines that call for islands to be covered with either bedding soil or a blanket-like material (typically composed of coir or jute) at island launch. In some settings, where islands tend to very quickly develop a carpet of macrophyte cover, clients have opted to not incorporate this protective material. To date, FII knows of no island failures associated with any of these protection strategies.
However, most naturally occurring islands grow in mesotrophic or oligotrophic waterways, while most BioHavens have been placed in eutrophic waterways (which is where they provide the most benefit). The added nutrients associated with eutrophic water suggests that BioHavens in such settings may outpace their naturally occurring counterparts in both growth and buoyancy. Current indications are that BioHavens become more buoyant over time.

In hyper-eutrophic settings, BioHavens could potentially extend all the way to the bottom of a waterway. If aerobic conditions are present in these conditions (which is unlikely), it is possible that macrophyte roots could tie into such a waterway’s benthic zone and permanently bond to the bottom of the waterway. In several settings, including high mountain spring creeks and streams associated with agricultural runoff, FII has successfully attached islands onto stream banks. In seasonal ponds, islands that were fully desiccated and apparently bonded to the dry waterway’s bottom have again floated after the waterway refilled. Where plants present on such islands were sustained and could continue developing roots, it appears likely that islands could mate permanently into the waterway’s benthic zone. It is unknown whether BioHaven’s biogas- based buoyancy, in combination with buoyancy from the polyurethane foam, would cause such an island to free itself. 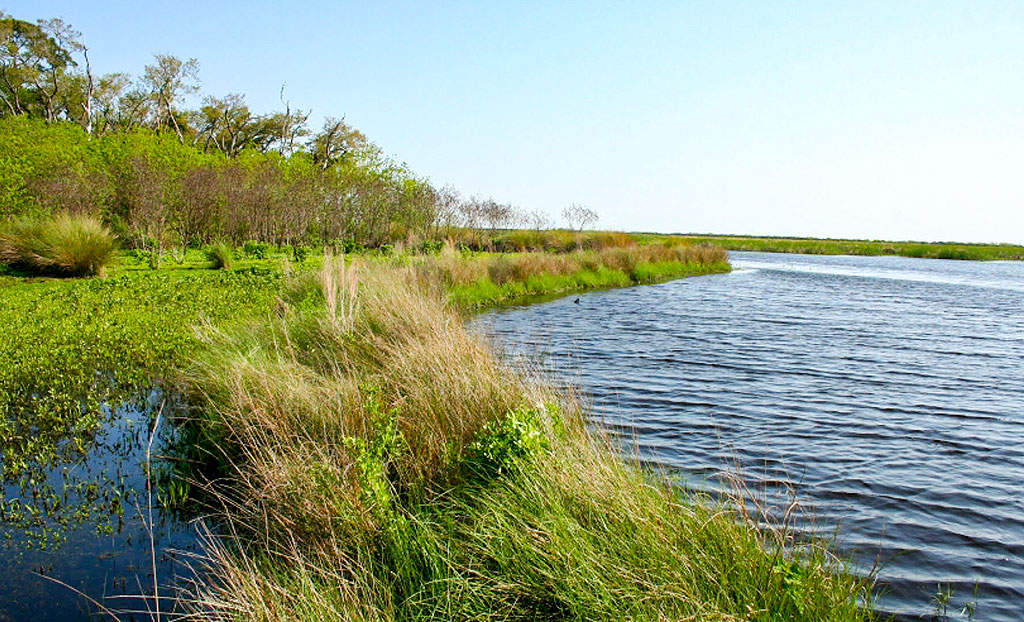