by Bruce Kania
Fish Fry Lake may be the best fishing hole in Montana…at least for kids! The lake is only 6.5 acres, but the water’s invitingly clear and it is extremely easy to catch yellow perch, crappie and bluegills. Even some Yellowstone Cutthroat trout happen here… which may be their easternmost extension. It’s easy to get hooked for life here. Fish grow fast in this lake at Floating Island International’s headquarters 25 miles from Billings, Montana. Fish Fry Lake is a test site for BioHaven® Floating Islands as well as other embodiment's of BioHaven technology.

The Thrill of the First Catch
Last year over forty kids (and a couple adults) caught their very first fish on the lake. For most of these fisher people it was as simple as attaching a piece of nightcrawler onto a small jig head, then flipping the baited hook into the crystal clear water and watching their line for some indication of a bite. Typically, the line will twitch when a fish picks up the offering, and then it’s a straightforward process. Lift the rod tip and reel in a scrappy panfish. Some kids start off with a cane pole, just like I did way back when. Today there’s even lighter fiberglass extension poles and it’s pretty easy for little guys, and gals, to swing the offering over open water, wait a moment, then pull up a seriously exciting fish! 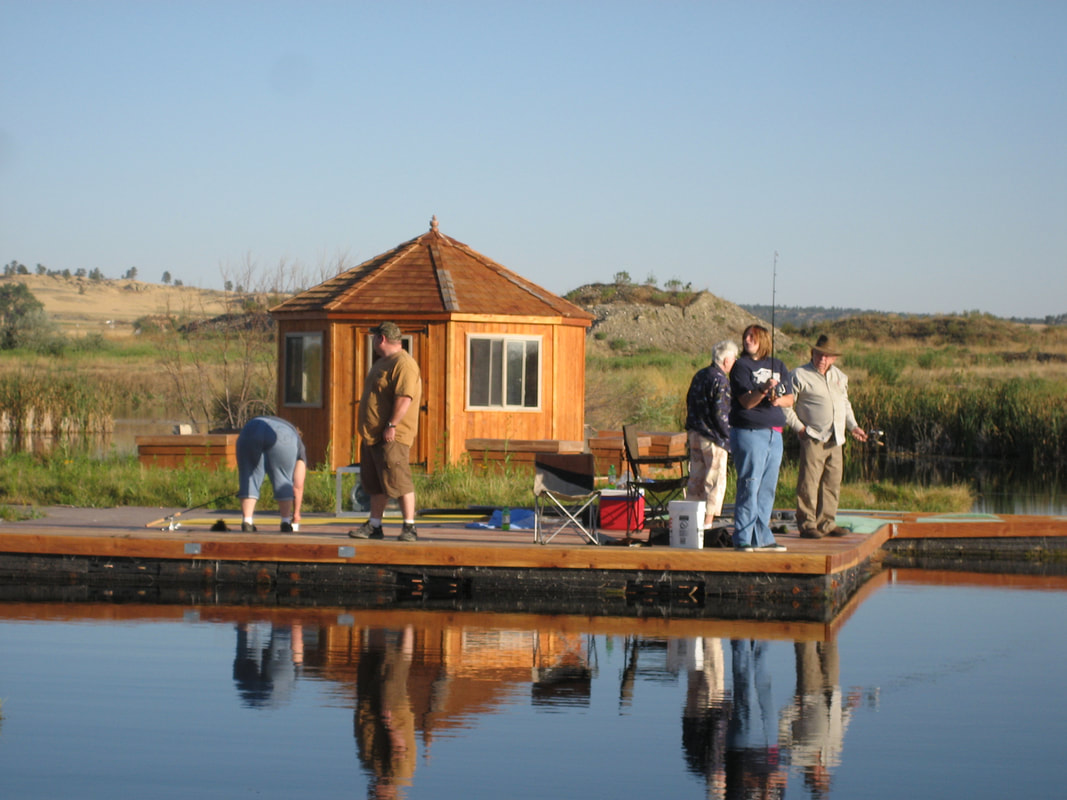 As I was growing up, there was a similar wetland within walking distance…and kid tracks along the shoreline evidenced fascination with critters and plants, and pretty much everything wild. Episodes with poison ivy notwithstanding, kids and water and fields and wildlife, they used to go together as naturally as water flows downhill.

Today though, computers seem to have taken over some of that space, some of the territory that used to be reserved for kids and nature to get to know each other. We are not against computers! The advances associated with the huge strides in information transfer technology that we’ve experienced in the last twenty years are life changing, and mostly positive. But wouldn’t it be ideal if we could retain some connection with nature? And certainly not just on a computer screen, but in person and up close! Catching a fish, splashing after a leopard frog, or sneaking up on a big old gander goose is the stuff of childhood, and I don’t think it’s a good thing to miss out on.

I remember a troupe of kids passing by with fishing rods in hand one day last summer, when one of the boys, lagging behind, complained about the sun being “too hot!” A young gal in the group suggested he “man up”, at which point the young lad was pretty much forced by the amazing power of peer pressure to deal with conditions. Not sure if those kind of life lessons happen frequently in front of a computer screen.

And kids don’t catch fish automatically. Not even on Fish Fry. They must learn the process, think it through, and then connect the dots. Along the way, with a bit of patience, they are rewarded. This is good stuff for kids.

There was a young gal that could not handle touching a worm. When it came to touching a fish, that was at least as bad as the idea of touching a worm. An hour later she was independently doing both. Real life lessons, and a new connection with where food comes from. More good stuff!

Today the majority of freshwater lakes in the U.S. are so nutrient rich that they are at risk of running out of dissolved oxygen, without which fish die. Fish Fry Lake has turned this condition on its head. We have learned how to cycle those same nutrients into fish, instead of algae. Catch rate on Fish Fry is a fish every two minutes on average. The 6.5-acre lake yielded 5,168 fish last year, which translates to 210 pounds of fish per acre. And along the way the water in Fish Fry was kept within Cutthroat Trout temperature requirements.

A nearby public lake, with conventional management, yielded about ten pounds of fish per acre. And those fish were stocked, while Fish Fry’s, are wild and naturally reproductive. In late summer, the bottom half of the public lake is devoid of breathable oxygen. Trout that were stocked in that lake in the spring have a choice…they can cook in the warm water on top or suffocate in the stratified cooler water below. The same conditions repeat themselves in thousands of U.S. waterways every summer. But it doesn’t have to stay this way.

What if we focused on our public waterways, especially in cities and villages? What if we took that water and cycled the nutrients that are already there, into fish? This is a very real prospect. We do have the science, and we have the tools. Dive into our website and keep this vision in mind…of kids catching fish hand over fist. This is a new vision of abundance, and it’s within reach.

We can concentrate nature’s wetland effect and the result is an upward spiral that leads to both clean water and huge abundance of healthy, vibrant and edible fish.

Following are a few Thank You notes by kids who’ve fished here on Fish Fry:

I liked... fishing, seeing the fish. Thank U.

Thank you for letting us fish for different kinds of fish. I enjoyed fishing. I also caught a ton of fish within the small amount of time I spent fishing. I also enjoyed walking on the floating islands. I really enjoyed throwing frisbees for the three cute dogs… I thoroughly enjoyed going to Floating Islands and I hope to come again. Thank you very much.
© Copyright Floating Island International, Inc. All Rights Reserved - Privacy Policy