Eutrophic water is impaired water, and it contributes methane to the atmosphere — 70x worse than CO2 for climate change.

Back in the early ’70s when the Clean Water Act was initially passed, less than 20 percent of freshwater was eutrophic. Today slightly more than 50 percent is eutrophic or hyper-eutrophic, a relatively new classification to describe grossly polluted water.

Unfortunately, we are in a major climate change downward spiral, since eutrophic and hyper-eutrophic water produces terrific volumes of methane. Methane is some 70 times more impactful than carbon dioxide relative to climate change impact, according to scientific study (DelSontro).  Regions serious about emissions reduction, concerned about the concentrations of gasses in the atmosphere that contribute to the greenhouse effect, who are committed to reducing their climate impact, would be smart to examine how fixing impaired water will reduce greenhouse gas emissions.

The Clean Water Act was poorly named. Yes, it did address some forms of chemical pollution, the kinds that got press when rivers contaminated by industrial waste caught on fire!  But the Act didn’t touch on what today is a major source of impaired waters: synthetic fertilizers. More than 80 percent of these excess nutrients that cause eutrophication come from the overuse and misuse of fertilizers by agriculture. Farmers have been compelled by the manufacturers, who seem to have disdain for natural methods of farming. Ah, the agricultural revolution!

This is what the non-point source pollution in our waters leads to:

Can we fix impaired water to reduce greenhouse gas emissions?

Yes, there is a fix. It starts with watershed design. A watershed is an area of land that carries water, either above- or under-ground, and picks up contaminants, like these excess nutrients from local agriculture, and then drains into another body of water. We all live in a watershed! Through education that translates into prevention and conservation, every one of us can affect change in our watershed.

However, only those in charge of water resources can fix impaired water to reduce greenhouse gasses in the atmosphere.

Nature’s wetland effect is a well documented model for clean water. Wetlands' value to the ecosystem can’t be overstated. To fix impaired water and reduce methane emissions, turn to a natural model. The wetland effect is the only model with a clear track record of sustainably regenerating murky, turbid water poised to generate these massive harmful algae blooms, the source of methane releases!

Concentrate nature’s wetland effect, employ nature as a model, across watersheds. And move quickly, as time is running out!

Yes, it is expensive to fix impaired water. It is expensive to reduce our climate impact! How expensive will it be to find Planet B? Understanding that atmospheric concentrations of methane emissions will speed up climate change, it’s too costly to do nothing. Fortunately, there are a number of ways that using a floating treatment wetland system, in particular, BioHaven Floating Islands, can pay for itself. We call it Water Resource Recovery. The emergence of floating photovoltaics as a viable alternative energy source is presenting a unique commercial angle, since both innovations work on the surface of water.

Large solar-on-water projects are built to generate energy revenue. If they include a water treatment feature, such systems begin to address the vast scalability issue. It takes about six acres of floating solar to generate a megawatt of power, and about 25 megawatts to get the attention of wholesale energy distributors. That’s 150 acres of FPV.  If a sizable fraction of that was made up of BioHaven Floating Island modules, water improvement would occur.

We have a sense of the price we pay for the status quo. What do we stand to gain by adding natural water-quality enhancement to FPV? Watershed design always involves multiple stakeholders. It’s socially impactful, and politically “hot.” But it must take place soon! Unlike the legislators from the early ’70s, the current administration may be willing to tackle this issue.
Reach out today, and let's put together a plan for fixing your impaired water and lowering your GHG emissions. 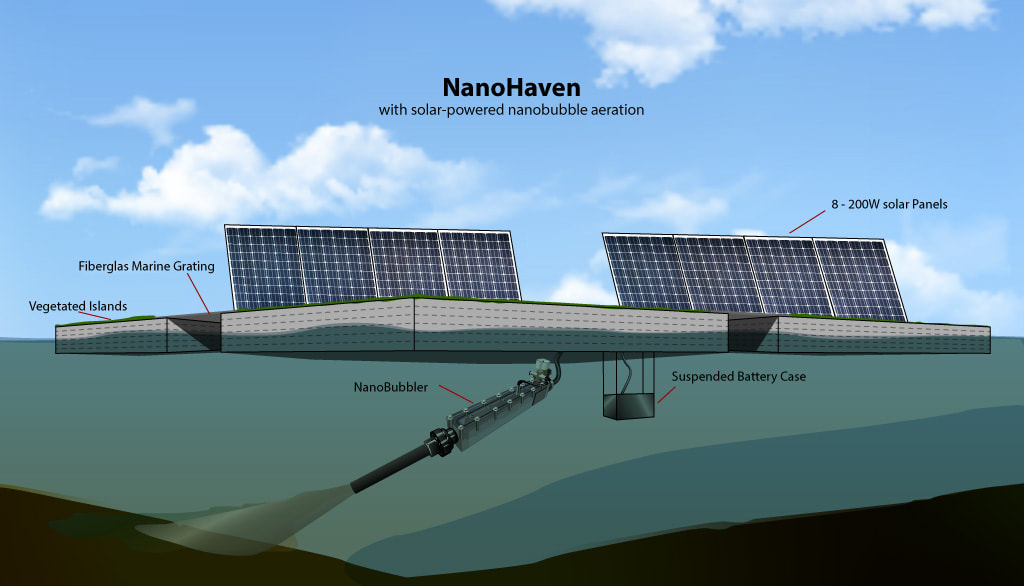 Rendering of one design for a BioHaven Floating Island whose primary purpose is to fix impaired water, secondary purpose to generate its own power.
Sources:
DelSontro, Tonya, Jake J. Beaulieu, John A. Downing. “Greenhouse gas emissions from lakes and impoundments: Upscaling in the face of global change” Limnology and Oceanography Letters 3, 2018, 64–75 VC 2018 published by Wiley Periodicals, Inc. on behalf of Association for the Sciences of Limnology and Oceanography
doi: 10.1002/lol2.10073. Accessed 2/3/21.
© Copyright Floating Island International, Inc. All Rights Reserved - Privacy Policy