Understanding what riparian edge is, and how it fits into the food web, can help us understand solutions to climate change and biodiversity loss.

Whitetail deer are animals of the edge. Humans are also animals of the edge. If you ever take another airplane flight at night, watch for the patterns of light. They define where people live and concentrate along water’s edge. The structure that many fish seek out is also a form of edge habitat.It’s called riparian edge habitat, and is traditionally the most expensive to recreate, and the most valuable in terms of bio complexity. 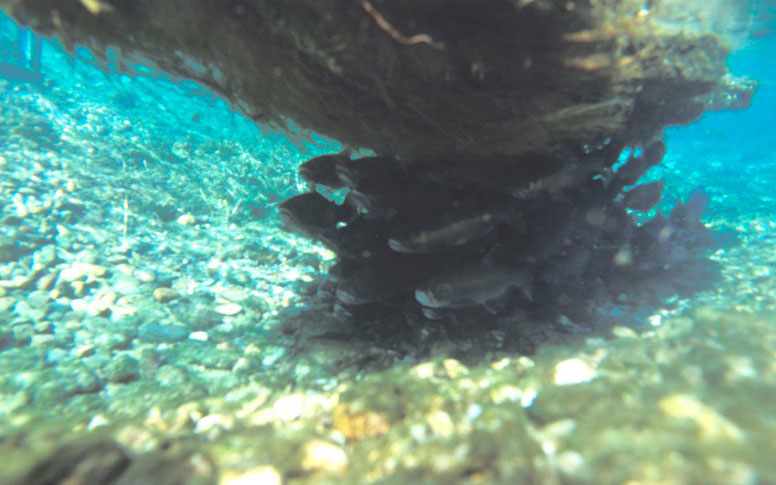 Clustering under a floating island, trout hide from predators, enjoy shade, and find food.
The riparian edge is crucial for biodiversity.When fishing on Fish Fry Lake, my company’s research waterway, by far the most frequent strategy is to move along the shoreline in a canoe and cast to the edge. We may cast to a rocky outcropping, the perimeter of a patch of lily pads, or the edge of a floating island. Whether fly fishing for chunky bluegill or fishing plastics for bass, this strategy is consistently productive. You fish where the fish live. Take a Go-Pro camera and snorkel along the edge of the floating islands and literally, that’s where dozens, even hundreds, of fish happen.

What is a riparian edge? It’s wherever vertical meets horizontal along water’s surface, and it’s where creatures concentrate.

I don’t know how many times, going back all the way to when I guided for Musky in northern Wisconsin to now, as I fish bass on Fish Fry, that I present a lure and a wake — like that driven by a shark — snakes towards the ripple. The predator fish had been tucked into the very edge, in cattail or lilies, or under an island. Waiting. Then the fisher person’s line just stops, twitches, and the serious action begins!

The lake itself has been in transition. We were approaching 50 percent underwater aquatic vegetation coverage two years ago, but now are at about 30 percent. This resulted in excellent bass fishing over the last two years. And if you’ve never tasted “Crispy Bass” per my cast iron paleo process, you have a major treat in store, if and when you ever visit me at Shepherd Research Center! (Or, grab the recipe here!)

Key to the lake’s transition has been its forage base, which includes young of year of all the fish in the lake. These guys are fair game, and end up being a critical and relatively steady, year-round source of forage for the big guys.

But our big three in terms of forage always includes crawfish. They show up in the gullets of any sportfish with a mouth big enough to inhale them. This includes big yellow perch, big black crappie, and of course, largemouth bass. I am guessing that the crawfish account in large part for the wonderful flavor of the bass too!
We usually connect on six to eight bass in an hour, per fisher person (with plastic worms). We’ve caught bass up to 6.25 pounds, yellow perch approaching two pounds, and 17-inch black crappie, not to mention lots of filletable bluegill!

We propagate fathead minnows, five prong sticklebacks, a native cyprinid that the perch and crappie absolutely crave, and huge numbers of crawfish in a pond just up watershed from Fish Fry. No game fish in that pond, just these forage species. The crawfish, in turn, eat aquatic vegetation. They are responsible for Fish Fry’s reduction in aquatic vegetation coverage. And the water quality in this propagation pond, which we call Minnow Pond, is startling.

Today when we do stomach analysis of bass, or perch, or crappie, or the big bluegill, we find crawfish, nymphs, and the fry of yellow perch, fathead minnows, and occasionally small bluegill too. Imagine 17-inch black crappie, with mouths large enough to inhale young of year bluegill! The food web is incredibly dynamic. That is the overriding lesson nature has hammered home, and one of my mantras: You don’t fix water in order to resurrect the food web — you resurrect the food web in order to fix water.

Through the use of dyes, algaecides, and herbicides, pond owners reduce good habitat in their ponds. Fewer plants mean fewer beneficial insects, less bird life, and low numbers of frogs and toads. My dream is that the urban waterways that are today managed with toxic chemicals (or not managed at all) will tomorrow be Transition Water. We must learn to partner with nature. We must learn not to fight nature, but to team with nature. Why is impaired water a problem?

Nutrient rich water, seen by laypeople, is a smelly, green, nuisance. But stagnant water is more than just nasty; it’s responsible for producing some the most potent greenhouse gases, namely methane and nitrous oxide, which are far more destructive to the atmosphere than carbon dioxide. Every BioHaven launched into such water helps prevent the formation of these gases. Find out what other climate benefits are delivered.

Even moderate increases in nutrients can move water towards eutrophication and corresponding increases in the greenhouse gas effects on the atmosphere. But today’s rate of eutrophication is anything but moderate. Harmful Algae Blooms are an indicator of this and they are increasing at an alarming rate.
Impaired water grows harmful insects, and healthy water grows beneficial ones.

At Holly Pond in Sheridan, Wyoming, for example, one of our distributors installed BioHaven and Floating Streambed Floating Islands. Objectives were to address algal blooms by reducing total phosphorus (TP) and total nitrogen (TN) concentrations, and to also control mosquitoes. Less than a year after installation of floating islands, Holly Pond #1 water quality was dramatically improved and algae growth was greatly reduced. The total nitrogen concentration was substantially lowered and the total phosphorus concentration was also presumably reduced. And the City of Sheridan has been able to eliminate chemical addition for mosquito control from the pond, which now has a thriving fathead minnow population. The minnows are a natural mosquito larvae predator, and a side benefit of healthy water.
The wonderful factor that few understand, and essentially none of us talk about, is that today’s nutrient impaired water, which when left unattended becomes a harmful algae bloom and a mosquito and midge factory, can be transitioned into incredibly productive fisheries.

The Evolution of a Waterway

Learning how to grow fish instead of algae requires a bit of science, a dash of intuition, and a whole lot of help, actual intervention from Nature. Fortunately, Nature never sleeps.

The riparian edge of our pond and our Floating Islands attract not only fish, but other species of wildlife who rely on the biodiversity of the riparian habitat. Some forty percent of all animal species live or reproduce in a wetland environment.

Some fishery managers go through incredible trouble and expense to grow fish and transplant them into their fisheries. This is unnecessary! Still other water managers seek to “clean” their water with chemicals and dredges and minerals, etc., so that they can build a recreational lake or more hospitable place for fish, wild birds and people. Instead, they could allow nature’s food web to take place.

How is this done? Nature’s wetland effect. Blend surface area with circulation, and nature steps forward to move water to a healthy state. Create a healthy riparian edge, and you’ll be creating healthy habitat for a diverse community of life.
© Copyright Floating Island International, Inc. All Rights Reserved - Privacy Policy